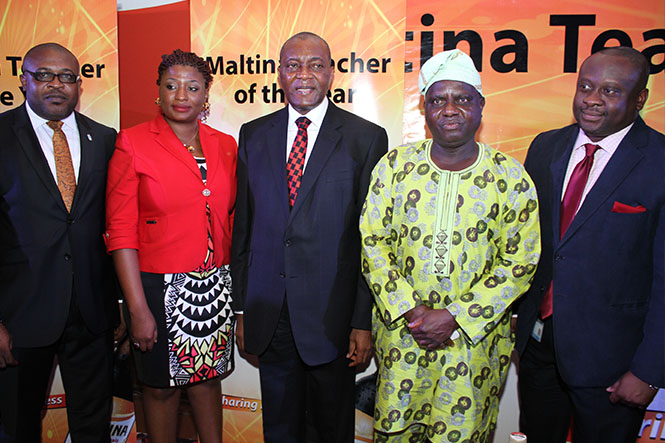 Nigerian Breweries Plc has launched the Maltina Teacher of the Year, an initiative to recognize and celebrate exceptional teachers in the country. Unveiling the project at a press conference in Lagos, the Corporate Affairs Adviser, Nigerian Breweries Plc., Mr. Kufre Ekanem, stated that the Maltina Teacher of the Year Award is designed to recognize, celebrate and motivate teachers in Nigeria with a first year focus on public secondary schools. The initiative is a project of the Nigerian Breweries-Felix Ohiwerei Education Trust Fund.

According to Mr Ekanem, collection of applications opened on 20th May 2015 and would last till 30th June 2015. Interested teachers are to download application forms from the Maltina website www.maltina-nigeria.com . Applications forms should be completed and uploaded to the website or sent by post to P.M.B. 12632, Marina, Lagos.

All applications will be subjected to an intense selection and judging process. An external and independent panel of judges has been constituted to ensure transparency, credibility and objectivity of the initiative. However, the identity of the panel members will remain withheld till their task is complete. The 5 – step evaluation process of the entries received will result in 37 champions (one per state and the FCT). Each state champion will receive N500, 000.00. From amongst these State Champions, the Maltina Teacher of the Year will emerge. All State Champions and National Winners will be celebrated in a grand ceremony on October 5 2015 in commemoration of World Teachers Day.

The overall winner gets N1million cash for five years, to be drawn at the end of the end of every year. Additionally, the winner is also entitled to overseas training while the school he or she represents also gets a classroom block. While the first runner-up gets N1million, the second runner up will take home N750, 000.00. This is in addition to the N500, 000.00 they would have received as state champions.

According to Ekanem, “Everywhere in the world, teachers play a vital role in training, coaching and determining the quality of education, and this is critical to sustainable national development. “However, these molders of the society seldom get the recognition they deserve. To remedy this situation, the Maltina Teacher of the Year initiative aims to recognize and celebrate our exceptional teachers around the country. As it is widely said, the children are the future of the nation and whatever you do for a child ultimately impacts the nation. Our objective is to create an avenue where exceptional teachers will be showcased and rewarded annually and continuously.”

Meanwhile, the Nigerian Union of Teachers (NUT) has adopted Maltina as the union’s official drink. Acting Deputy General Secretary of the union, Chief Wole Oyeniyi, who spoke at the event hailed all involved in the initiative, stressing that “Maltina has taken the lead in bringing back the lost glory of the teaching profession.”