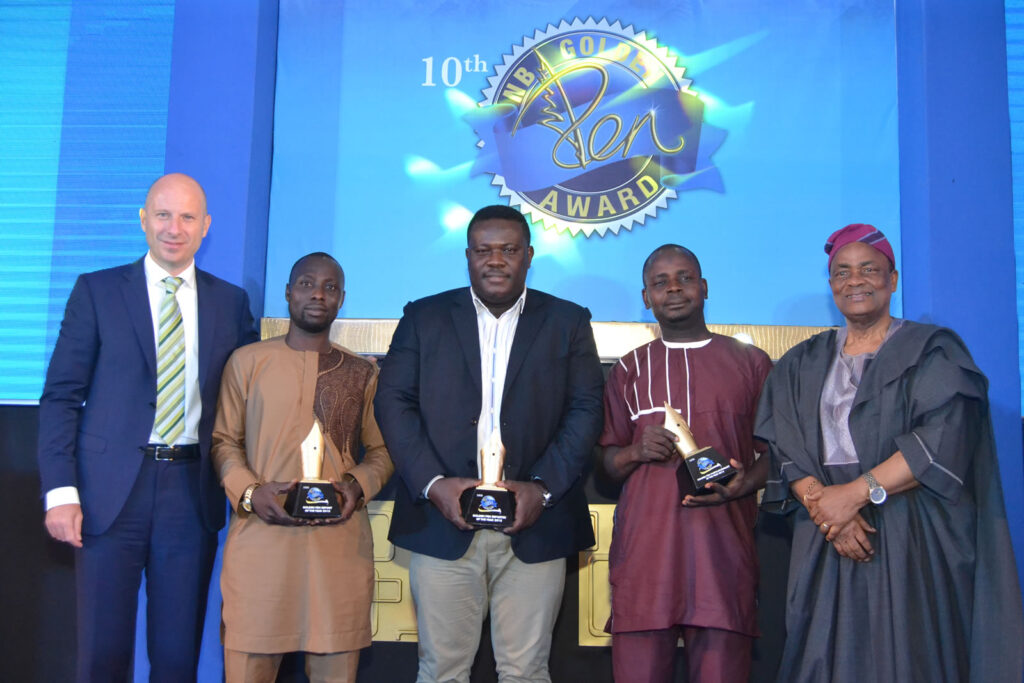 The award, which is in its 10th year, is geared towards promoting professionalism and objective reportage of events in Nigeria. It is also meant to reward journalists who abide by the fine ethics of their profession.

In the night of glitz and glamour, Eric Dumo of The Punch newspapers emerged the NB Golden Pen Reporter of the Year. The first runner-up was Bayo Akinloye of Thisday Newspapers while Chikodi Okereocha of The Nation was the second runner-up.

The Photo Journalist of the Year award went to Bunmi Azeez of Vanguard newspapers. Odutayo Odesanya of the Punch emerged the first runner-up, while Lucy Ladidi of The Guardian Newspapers was the second runner-up.

Mojeed Alabi, a reporter with the New Telegraph repeated his last year’s feat by winning the ‘NB Report of the Year’.

A cash prize of N2 million plus a gift went to the Nigerian Breweries Golden Pen Reporter of the Year, while the first runner got N1 million and the second runner up went home with N750,000.

In the Photojournalist category, the overall winner received N1 million plus a gift item while the first and second runners-up were rewarded with N750,000 and N500,000 respectively.

The winner of the Nigerian Breweries Golden Pen Report of the Year received N1 million and a gift item.

In his welcome address, Managing Director of Nigerian Breweries Plc, Mr. Jordi Borut Bel noted that since inception, the initiative has helped to enhance journalism practice in Nigeria, going by the quality of the entries received every year as attested to by the distinguished independent panel of judges.

He explained that between 2014 and 2016, the theme of the award was Education, Youth Empowerment and Talent Development, which he said was informed by the need to inspire the media to draw attention of stakeholders to the benefits of revamping Nigeria’s education sector and develop the innate potential and talents of Nigeria’s teeming youth population.

“With the completion of that three-year phase, we directed the attention of the Nigerian media to Agriculture, Local Sourcing and Industrial Development, as the thrust for the 9th Nigerian Breweries Golden Pen Award. This theme remains the focus for this milestone 10th edition of the awards.

“The emphasis on Agriculture, Local Sourcing and Industrial Development is not only in tandem with the current push for economic recovery in the country, but also key to making it achieve her full potential to become a self-reliant nation, “ he said.

Professor Ralph Akinfeleye, Chairman of the Panel of Judges of the NB Golden Pen Award, commended Nigerian Breweries for the initiative and enjoined journalists to aspire to the highest standards. He maintained that the quality and quantity of entries have improved significantly and noted that Nigerian Breweries has set a standard for other organisations to follow.

Speaking on Media and the Agenda setting for Economic Development, the guest speaker at the occasion, Dr. Reuben Abati thanked Nigerian Breweries for the initiative which he said is capable of motivating journalists in Nigeria towards excellence.

While maintaining that the diversification of Nigeria’s economy has remained a topical agenda, he challenged the media to emphasise the story of diversification and generate conversation by emphasising the story and picture in the minds of the people.

He challenged the media to support the efforts to domesticate the Nigerian economy, maintaining that Nigerian Breweries has set a worthy example on how to grow agriculture and local industry.