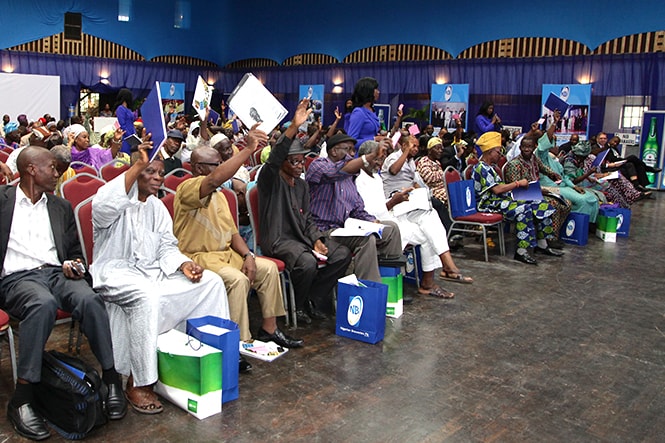 Shareholders of Nigerian Breweries Plc, Nigeria’s foremost brewer, have applauded the company for recording an impressive financial result for 2015.

According to the shareholders who spoke at the 70th Annual General Meeting, AGM, of the company held in Lagos on Wednesday, the company’s performance in spite of the very challenging operating environment, stood out as a shining example for other manufacturers to emulate.

Mr. Bello Owonikoko, Chairman, Ibadan Zone of the Shareholders Solidarity Association stated that the 2016 results and the dividend pay-out are strong signals of the resilience of the company in the face of the challenges of the economy.

The same sentiment was re-echoed by Chibuzor Eke-Emmanuel, who expressed confidence that the company remains in good stead to weather the storm and deliver good returns to shareholders in the future.

The 2015 audited results showed that the Company’s shareholders earned a total dividend of N38.059 billion, translating into N4.80 (Four Naira Eighty Kobo) per unit of the company’s ordinary share of fifty kobo each for the 2015 financial year. This is the highest dividend ever paid by the company in its 70-year history.

Addressing the Shareholders, Chief Kola Jamodu, Chairman, Board of Directors, said the board had October 2015 paid an interim dividend of N9.5billion, representing N1.20 per ordinary share of fifty kobo each. He stated that the policy of dividend pay-out is in the strategic interest of the shareholders.

According to him, the proposed final dividend will be subject to deduction of withholding tax at the appropriate rate and will be payable on the 12th of May, 2016, to all shareholders whose names appear on the Company’s Register of Members at the close of business on the 2nd of March, 2016.

“We remain committed to Winning with Nigeria. Thus we will sustain the investment in our operations, systems, brands and of course people. Cost leadership and market leadership supported by innovations remain our key strategic pillars,” Jamodu said.

Nigerian Breweries is the second most capitalized company on the Nigerian Stock Exchange (NSE). The company paid out a total dividend of N37 billion (N4.75 kobo per ordinary share of 50 kobo each) for the financial year ended December 31, 2014.

Not a few analysts agree that Nigerian Breweries Plc has consistently added value to shareholders investments with its dividend payouts. It would be recalled that for the 2013 financial year, the company’s board had recommended the payment of a total dividend of N34.032 billion, translating into N4.50 (four naira fifty kobo) per ordinary share of fifty kobo each.

According to the 2015 corporate rating report by Augusto and co; Nigerian Breweries possesses very strong financial condition and very strong capacity to meet local currency obligations as and when they fall due. The rating, Augusto maintained, is underlined by the company’s dominant position in the industry; highly experienced and stable Board of Directors; and competent management team. The rating is also supported by NB’s strong financial condition which is validated by good profitability, low leverage, good cash flow and adequate working capital.