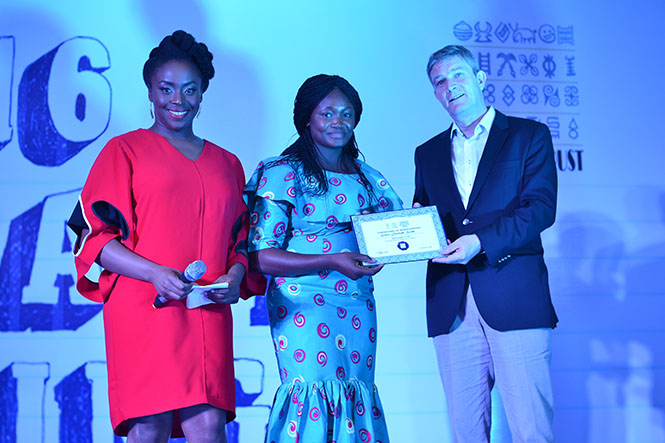 The 2016 Nigerian Breweries/Farafina Trust Creative Writers’ Workshop came to a grand close on Friday, July 1, 2016 at the Lagos Oriental Hotel, with the annual literary evening. The event which was attended by the workshop participants, facilitators, members of the Nigerian Breweries family, former governor of Anambra State, Mr. Peter Obi, the United States Consul General in Lagos, Mr. John F. Bray, among other guests, was held to mark the end of a ten day workshop to sharpen the creative writing skills of the participants.

Welcoming the audience which filled up the venue of the event, the Managing Director of Nigerian Breweries Plc, Mr. Nicolaas Vervelde said, “It is always a great pleasure to join this annual gathering of distinguished men and women of letters. I am happy to welcome you to tonight’s ceremony which brings to an end the eighth edition of the Creative Writers’ Workshop organized by Farafina Trust and sponsored by Nigerian Breweries. This partnership, which was founded eight years ago on our company’s desire to encourage the development of literary writing skills in Nigeria, is part of our strategic corporate investment in talent development and youth empowerment in Nigeria. Since its inception, the Creative Writing Workshop has grown to be a major chapter in our Corporate Social Responsibility calendar. Driven by Chimamanda Adichie, Nigeria’s award winning writer, Nigerian Breweries and Farafina Trust have helped to discover and sharpen literary skills through this platform.”

Mr. Vervelde commended the organizer of the initiative for the contributions to make many dreams come true, adding that, “As a socially responsible corporate organization, Nigerian Breweries is committed to championing causes that would continually add to the society because of our belief that business should not operate in a vacuum, but as an integral part of the community where it exists”. He thanked the workshop facilitators Chimamanda, Eghosa Imasuen, Aslak Sira Myhre and Binyavanga Wainaina who has been a part of the Creative Writers’ Workshop since inception in 2009.

On her part, Chimamanda Adichie said that more than 2000 entries were received for this year’s workshop, but the most outstanding 22 writers were selected. The writers who were taken through a ten day workshop leading to the literary evening were awarded certificates of participation at the event. Chimamanda Adichie thanked Nigerian Breweries for the annual sponsorship and the opportunity to relate, teach and inspire the workshop participants who share the same passion to tell stories.

The night also featured ‘Audience in Conversation’ with Chimamanda Adichie and Eghosa Imasuen, author of ‘Fine Boys’. The session provided the audience an opportunity to interact with the facilitators in questions and answers.

The evening morphed into a gig when live band queen Ego took the stage and treated the guests to melodious renditions of songs including popular hit ‘Never far away’ that got the guests on their feet and signing along.

The Nigerian Breweries sponsored Creative Writers’ Workshop which began in 2009 is in its eighth year. The event attracts internationally established writers as facilitators to burnish the skills of selected participants. Other writers who have participated in the workshop and literary evening include Jeffery Renard Allen, Robert Spillman, Ama Ata Aidoo and Chika Ike.