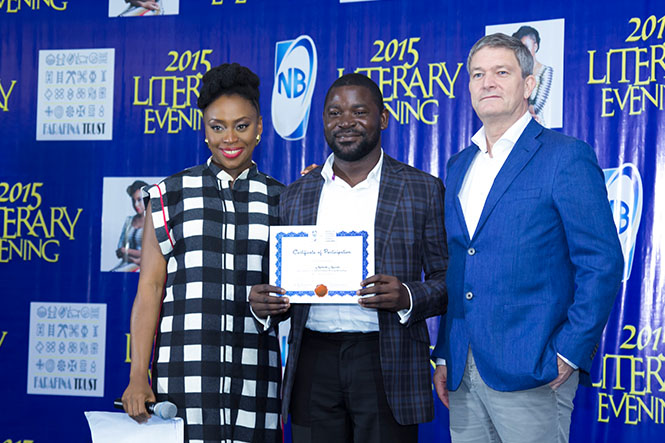 The annual Nigerian Breweries/Farafina Trust Creative Writing Workshop came to a grand close on Friday, June 26 2015 with a Literary Evening at the Oriental Hotel Lagos. The 2015 edition of the workshop which commenced on Tuesday June 16, 2015 trained 25 aspiring writers on different perspectives to the art of storytelling. It took the form of a class where participants are assigned a wide range of reading exercises, as well as daily writing exercises by facilitators led by Nigeria’s celebrated international writer, Chimamanda Adichie and co-facilitated by Kenya’s Caine Prize winner Binyavanga Wainaina and Norway’s culture administrator and director of the Oslo House of Literature, Aslak Sire Myhre.

Speaking at the ceremony, The Managing Director/CEO, Nigerian Breweries Plc, Nico Vervelde expressed his pleasure at the successful conclusion of the 2015 edition. He restated the commitment of Nigerian Breweries, in championing causes that add value to the knowledge economy.

“Our company has over the years been a partner with government, communities and various non-governmental organisations through her corporate social responsibility activities which is defined by its Brewing a Better World strategy, our company’s long term sustainability agenda. This has resulted in the execution of various projects and initiatives such as building of classrooms and libraries in both primary and secondary schools across communities in Nigeria.
“We also executed the “Beyond the school Initiative’, a career counselling programme for senior secondary school students in Lagos. In May 2015, we launched the Maltina Teacher of the Year, a new initiative aimed at recognizing and celebrating public secondary school teachers around the country.”
He added that the partnership with Farafina Trust to sponsor the Creative Writers Workshop was founded on the company’s desire to encourage the development of writing skills as part of its strategic corporate initiative for talent development and youth empowerment in Nigeria. “I have no doubt that the creative writing workshop has helped to fine-tune the skills of Nigerian writers as well as encourage potential writers to fulfil their desire for self-expression. I thank Chimamanda and her Farafina Trust team for their contributions to making many writers’ dreams come true.”
Since its inception in 2009, Nigerian Breweries has sponsored the Creative Writing Workshop in partnership with Farafina Trust. The Workshop has helped to discover and sharpen literary skills in Nigeria. It has trained over 120 creative writers and has featured several international writers. The list of international writers include; Jeffery Allen, a Professor of English at Queens College of the City University of New York and an instructor in the Writing Program at The New School. Robert Spillman, Editor of Tin House, a ten-year-old bi-coastal (Brooklyn, New York and Portland, Oregon) literary magazine that has been honoured in Best American Stories, Best American Essays, Best American Poetry, O’Henry Prize Stories, the Pushcart Prize Anthology and numerous other anthologies. Amah Ata Aidoo, award winning Ghanaian writer, Chika Unigwe and Binyavanga Wainaina have also been part of the literary workshop since its inception.

At the Literary Evening, participants were presented with certificates of participation by the organisers while the public had the opportunity to interact with the facilitators on issues bothering on literature in Nigeria. The event came to a close with a thrilling performance by Woju crooner, Kiss Daniels.