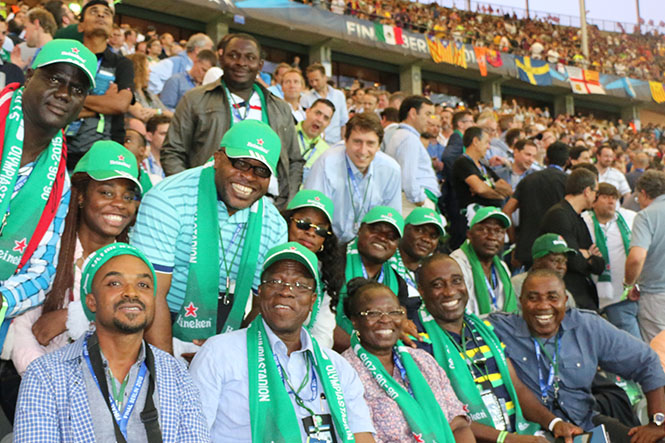 The UEFA Champions League final between Juventus and Barcelona at the Olympiastadion Stadium, Berlin, Germany, may have come and gone, but for the distributors of the premium beer -Heineken, the memory of their Berlin experience will linger for as long as they live.

Heineken, the major sponsor of the world’s biggest club competition sponsored a number of distributors, business partners and media representative to watch the finals of the UEFA Champions League and all of them had an exciting time at the German capital.

Aside the Berlin experience, Heineken also made 20 ‘lucky’ Nigerians much further away from home, to be part of an all-expense paid VIP experience on the exotic island of Ibiza, off the coast of Spain.

For most of the Nigerians that traveled to Berlin, it was a dream when they received the call from Nigerian Breweries that they have won an all-expense paid trip to Berlin, “It was like a dream when the call came through that I have won,” Benin based Christiana Odiaka said.

Odiaka, whose experience at the Olympiastadion was her first of watching a football match live said, she would forever remain grateful to Heineken. “Though I’m not really a football buff, all the experiences about football before now was restricted to watching it on television, most especially when it involves the national team. It was more exciting that my first experience was to see the greatest footballers on the planet. It was beyond my wildest dream that I would one day watch Lionel Messi play live. I will live to cherish the experience,” she said.

Aside from the match proper, the customers also had fond memories of other exciting places.

The customers first had a feel of what was in the offering for them on their first day of arrival in Berlin, as they visited the KraftwerkKopenicker, where they were entertained to the fullest. They had the opportunity to meet with other nationals from all over the world while they were also treated to good music, entertainment and also had a glimpse of the UEFA Champions League trophy.

On the second day, after a wonderful breakfast, buses were already waiting to take them to their next port of call which was the Tempethof Damn after which they proceeded on a 45 minutes road walk accompanied by a tour guide who took them through history and memories of the old West Germany and the remains of the Berlin Wall.

In fact, an Oshogbo-based customer, Rauf Olaiya said as much as he was looking forward to seeing Messi, Neymar and other Barcelona stars on parade, seeing the remains of the Berlin Wall was something he would take to his grave. “Nigeria too can make the best of our history and tradition if the government can invest more on tourism. “The Germans have taken advantage of their history to attract tourists to their country.” Olaiya said.

Olaiya, who interestingly is a Barcelona fan was very grateful to Heineken for not only giving him the opportunity of watching his team play in the final of the UEFA Champions League live but also to visit places of interest in Berlin.

“I’ll have a lot of stories to tell when I return to Nigeria and wish for another opportunity to visit Germany. The environment is very conducive, the city of Berlin is well planned and it’s good for business. I’ll forever be grateful to Heineken for the rare opportunity, “he said.

However, for Chinedu Ofoma, who is an ardent Barcelona fan, he said seeing the Barca trio of Messi, Suarez and Neymar play live will remain monumental. The other thing that thrilled him was the Heineken Village. “The fun at the Heineken Village was unprecedented. There was a lot to eat and drink and I also met and made friends with other Heineken family all over the world. Though the moment I boarded the plane to Berlin, my attention was on the game and nothing else, but the Heineken Village was the dress rehearsal to Barcelona’s victory,” an obviously elated Ofoma said.

For Ugochukwu Moghalu, after watching the Barcelona stars, he could not wait to return home and boast before his friends about how he saw Messi, Suarez, Neymar, Gerrad Pique and the likes live. “I will tell Nigerians I saw Messi and the gang live and direct, it was quite different from watching it on television. But inside me I was wishing it was Arsenal that I was watching playing live in the finals of the UEFA Champions League.

If the five Heineken customers indeed appreciated Heineken for the opportunity to see the game live, their appreciation indeed increased when soccer fans across the world started storming their hotel and were offering as much as 7,000 euro for a ticket to see the game live. “I never realized that to get a ticket to watch a match of this magnitude could be this difficult. So, I’ll indeed be watching Messi and co, with over one and a half million naira, (after converting 7,000 euro to naira). Heineken una try o,” one of the customers said.

On the whole, the Heineken customers enjoyed every moment of their stay in Berlin, with every one of them admonishing the way the German capital was planned, organized and the vegetation. The Customers no doubt left the city with lots of fond memories and were all grateful to Heineken and wish for more of such experiences from the International premium beer.