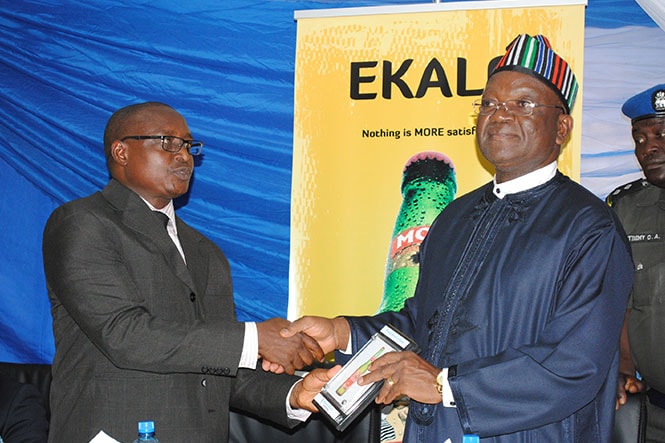 The Executive Governor of Benue State, Dr. Samuel Ortom has commended Nigerian Breweries Plc (NB Plc) for the bold step it took in revamping its Makurdi brewery. The governor praised the company for injecting the much needed funds that led to its upgrade which gave birth to the new More lager, a proud heritage of Benue.

The Governor made the commendation when he visited the brewery on a familiarization tour. During the visit, he also unveiled a mock up bottle of the new More lager beer, commissioned a road named after him and planted a commemorative tree within the brewery. With the visit, Governor Ortom became who the first sitting governor of the state to visit the brewery since it was established in 1982. The Governor also specifically applauded the company’s drive of sourcing its raw materials from the state which he says will go a long way in empowering local farmers thereby boosting the local economy.

“The Benue State government is committed to providing support to the brewery for the giant strides it has already taken. Similar industries were established in the 1980s but are now moribund; it is great to know that the Makurdi Brewery is still functioning, so I join my people in commending you for repackaging the product which now looks good and tastes better. I want to assure you that you’ve found a partner in us as we strive to create jobs and opportunities for our people so that our primary products can be processed. Benue is the food basket of the nation and your local sourcing initiative will ensure that the state continues to benefit in this capacity”. Governor Ortom noted that the lifeline provided by the upgraded brewery will go a long way in empowering local farmers whose produce can now be utilized locally”.

Delivering his welcome address earlier, Managing Director/CEO NB Plc, Mr. Nicolaas Vervelde stated that following the merger of Nigerian Breweries and Consolidated Breweries in December 2014, the company began an upgrade of facilities at the brewery to match the world class standards of Nigerian Breweries. “The upgrade with a total investment of over 1 billion Naira, in 2015 alone, led to the total overhaul of the brewery production process which can be seen in the improved quality of More Lager. Today’s More Lager, still proudly brewed in Benue, is now comparable to any international beer of repute”.

Vervelde, who was represented by Mr. Samson Aigbedo, Head Brewery Operations, added that the upgrade of Makurdi Brewery reflects the company’s confidence in the fundamentals of the Nigerian economy and commitment to the development of Benue State as a host community. “This also represents a bold attempt to showcase our commitment to winning with Nigeria. We have invited you here today not only to bear witness to the transformation that has taken place in this brewery but to join us as the symbol of our faith with the good people of Benue State.”

He stressed that the brewery, and the ancillary industries that support the business, will impact the economy of the region in diverse ways such as the creation of employment, increase in non-oil revenue generation to different tiers of Government and contribution to improved standard of living in the area.