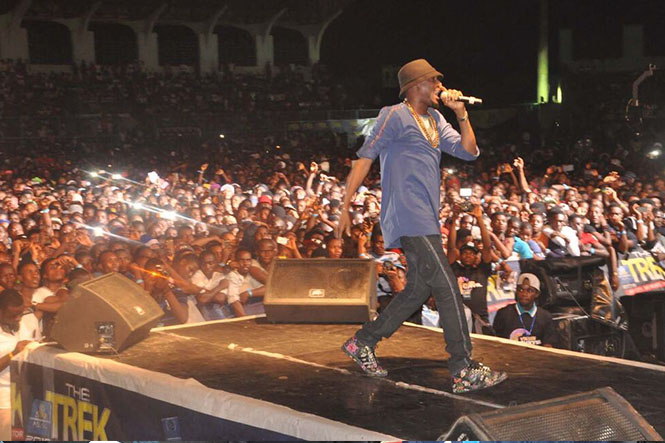 The bustling city of Sapele recorded a record breaking attendance for a Star Music Trek concert at last weekend’s #SapeleRocks! 2015 Trek concert. The Sapele stadium recorded a capacity crowd of more than 11,000 eager fans. As early as 8pm, the crowd was charged up and ready for a night of premium entertainment and they were not disappointed.

First came a number of warm-up performances from the local Sapele talents who got the chance to thrill the mammoth crowd as part of Star’s commitment to giving young Nigerians a platform to shine.

The evening kicked off in earnest when Black Magic hit the stage with his characteristic energetic style, performing hits like Rainbow, Repete and Pass You By. Up next was Runtown fresh from his bare-chested antics in Makurdi. The crowd came to life as he performed ‘Gallardo’, ‘Successful’, ‘The Latest’, ‘Bend Down Pause’ and the crowd favourite ‘The Banger’.

Then came Mr Raw who quickened the pace of the evening, delighting the crowd with his onstage antics. Clearly in a playful mood, his theatrics while performing ‘Obodo’ endeared him to the lively Sapele crowd. Without warning he further increased the pace of the evening and got the crowd going wild when he performed “Gyration”. Apparently, this particular song is popular in Sapele and they could not contain themselves. Other songs performed by the Abia state rapper include, “I’m In Love With An Angel”, “Spiritual Konji” and his latest track “Blow my trumpet” with Fanzy Papaya.

Then came the only lady on the Sapele Trek. A visibly excited Cynthia Morgan, with her trademark red hair stormed the stage. Quickly she got down to business, moving the crowd with her catalogue of hits such as ‘Popori’, ‘Don’t Break my heart’, ‘Lead Me On’, ‘German Juice’ and ‘I’m Taken’.

The night’s big surprise was an appearance by Sound Sultan, who came out of the crowd and took the stage with his throwback song ‘Jagbanjantis’. ‘Mercies of the Lord’ came through the speakers as he interacted with the crowd, signaling the turn of Oritsefemi to make his appearance. The crowd pleaser soon ramped up the tempo with ‘Redi’, ‘Sexy Lady’, and ‘Double Wahala’. Amidst all these, he found time for a dance contest onstage where the winner was rewarded with N10, 000.

Dancehall star Patoranking was the next to hit the stage and the noise level went up a few notches as the hit songs came out: ‘Daniella Whine’, ‘My Woman, My Everything’, ‘Alubarika’, ‘Murder’ ‘Girlie O’, ‘Emergency’. He then invited Young Grey C on Stage and together they performed ‘Chukwuma Remix’. He ended his performance by sharing the story of his musical career with the spellbound Sapele audience.

Then came the moment of the night – pop giant 2Face finally made his appearance onstage. At this stage the crowd got uncontrollably excited as a woman ran onstage and stripped off her clothes in front of him while a man in the audience was reduced to tears at the sight of the superstar. Quickly he launched into his bulging hit catalogue with songs like ‘Rainbow’, ‘Implication’, ‘One love’, ‘African Queen’, ‘I Hate What You Did You Did To Me’ and several others. The crying fan’s night was made when he was granted a chance to take photos with 2Face onstage. Finally he ended his performance with hit song ‘Ihe Neme’.

Speaking after his performance, 2Face commented, “I have to keep thanking Star for giving both myself and the fans the opportunity to interact like this. I have performed all over the world for many different audiences, but I have never felt the kind of love I have felt on the Trek. These are the fans – the people who make it worthwhile to get up in the morning and do what I do. Entertaining them on this platform is a wonderful experience for me.”

“The essence of organising this platform is to connect young Nigerians to their dreams. We want to demonstrate to young people that anything is achievable once they work hard and show dedication. Tonight’s turnout shows just how many people are listening to this message. We are very proud to bring this platform to youths around the country and it is gratifying to know that we are having a positive impact.”

The nationwide concert tour which has thrilled Nigerian music fans for nearly two decades has a tradition of bringing the country’s biggest artists together to thrill fans around the country and this year’s theme, “My Superstar Story” aims to inspire the youth to view their situations as a work in progress and to always keep their goals in mind.