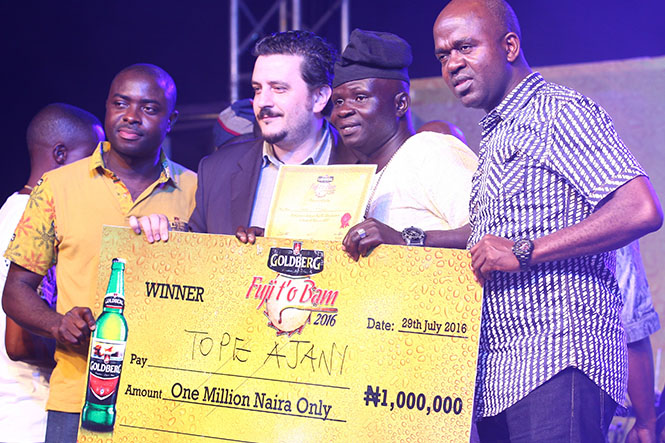 After months of rigorous drills, excitement and tensions, Tope Ajani from Akure, Ondo State has won the season four of Goldberg Fuji t’o Bam music talent activation that had over 1,500 fans in attendance at the Trans Amusement Park in Ibadan, Oyo State. Ajani, whose stage craft and renditions excited everyone at the event – will now wear the Wura 1 crown which comes with a cash reward of N1, 000, 000.  Saheed Ishola, from Sango-Ota, grabbed N750,000 as the first runner up, while Mufutau Alabi, from Ibadan went home with N500, 000 as the second runner up after the battle of wits where three other contestants, Shina Akanni; Kuteyi Sikiru; and Alausa Olalekan, also tested their mettle.

The night kicked-off with Ewi rendition before the contestants took turns to display their mastery of various Fuji theatrics to the admiration of the judges and the audience that thronged the venue of the event.

The high point of the event was the impressive performance by the International Fuji icons, Alhaji King Wasiu Ayinde (KWAM1), 9ice and Pasuma, who thrilled the fans with various hit songs from their rich repertoire. The night also witnessed a gathering of the best of Fuji celebrities and respected Yoruba movie actors and comedians like Odunlade Adekola, compere of the event; Alhaji SK Sensation, Adebayo Faleke and the winner of the third season of Fuji t’o Bam, Akeem Okiki.

Mr. Patrick Olowokere, Corporate Communications and Brand PR Manager, Nigerian Breweries Plc, said the importance of music to any country cannot be over-emphasised. According to him, the role of music in nation building is monumental as it fuels the creativity of listeners and makes for social bonding. His words: “Music transcends all boundaries of communication. Music and its rhythm define our humanity because it is universal and transcends language barriers. I believe it is important for one to have an open mind in order to be in touch with that sense of understanding. Music cannot be separated from our socio-cultural life and as such it is a social connector which has the power to suggest circumstances, moods, and moments. It has general appeal to human senses.”

Giving the rationale for the event, Mr. Emmanuel Agu, Portfolio Manager, Mainstream Lager and Stout Brands, NB Plc said the company always strives to champion, promote and associate with the culture of its host communities. His words: “This is what Goldberg has been doing with Fuji t’o Bam since 2012 when it inaugurated the concept.”

He stated that the initiative has successfully brought to life the twin socio-cultural tradition of companionship and celebration. “The initiative readily identifies and celebrates the rich musical tradition that sustains the cultural values of the people in the region. The indigenous musical platform, which is currently in its fourth edition, had in the last three editions led to the discovery of budding Fuji talents and artists. “It is clear that this platform has in no small way helped in burnishing talents and contributing ideas to the development of Fuji music and the culture of the Yoruba people.”